Trout is the term used to designate fish from the Salmonidae family, such as sea trout, rainbow trout or lake trout. However, they belong to different kinds. Let’s find out here the river trout or wild trout, its physical characteristics, its way of life, its mode of reproduction and the places where it is possible to find it.

Native to northern Europe, the river trout, Salmo trutta fario, from the Salmonidae family, is also called wild trout, Beautiful speckled or Fario of the name of the group to which it belongs. The life expectancy of wild trout is linked to where it lives. It is about 5 to 6 years in a river and 10 or even 15 or 20 years in a milder environment such as lakes.

She presents the physical characteristics following:

If the color of river trout varies depending on where it lives, it is quite simply because it allows it to better camouflage itself in its environment. This is a specificity that can be observed in many animal species and not only in fish. Specialists can, thanks to this genetic characteristic, identify the trout introduced into an environment and those which are native to it.

In adulthood, river trout can reach a maximum length of 50 cm for a weight of nearly 5 kg. But there are also adult brown trout of 20 cm which weigh only 500 g and others of 100 cm and 10 kg. 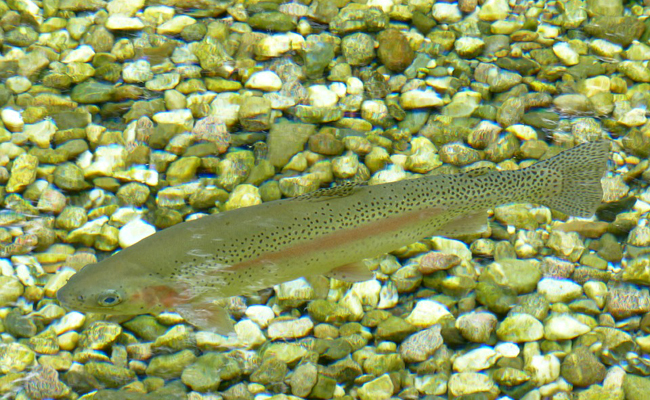 Its most developed senses are smell and taste, but it also enjoys sufficient sight to watch out for its prey, which it expects, day and night, while maintaining a position stationary. Carnivorous, the brown trout feed on aquatic insects, aerial insects and invertebrates. Its diet can also consist of small fish, including young trout of its own species as long as it is over 30 cm in length. The larger it is, the more important its hunting grounds. At the same time, it has an area which it reserves for its rest.

The Speckled Beauty can observe a fast of several weeks during the winter, in order to save energy, an undernourishment that will be caught up in the spring. When temperatures are extremely low, trout congregate. Outside of these particular periods, this fish hardly agrees to share its territory with his fellows. It is also a species that respects the social hierarchy within a group.

It is at the age of 3 that wild trout reach their sexual maturity. During the months of October to February, it sometimes migrates over long distances in order to find spawning grounds. This is where it will reproduce. In order for the female to lay her eggs there, the environmental conditions must be ideal, namely:

The female brown trout first probe the spawning site with its caudal fin and then clean it. It then digs a larger or smaller hole in the substrate, in relation to its own size. Finally, she deposits between 1,000 and 2,000 eggs per kilo, which can represent 6,000 eggs for a 3 kg trout. During the laying, the male (which the Speckled Beauty chooses herself) sticks to the female and expels her milt so that it mingles with the eggs so that they are fertilized. The female then covers them with sand. During this time, the male ensures his peace of mind and does not hesitate to chase away his intrusive competitors.

After one incubation whose duration varies according to the temperature of the water (at 10 ° C it lasts 40 days), the young will develop more or less quickly depending on the conditions of their environment (temperature, hydrogen potential (pH) of the water, food).

France: where do wild trout live?

In France, wild trout can be found almost everywhere, from Haute-Marne to Var, Hautes-Alpes in the Basque Country, Dordogne to Lozère, or even from the Pyrenees to Franche-Comté. Trout is the subject of a minor concern in terms of threat. But the balance of its environment is linked to pollution, climatic variations, the development of hydroelectric dams for example. It can therefore be endangered for native trout whose habitat could be degraded.